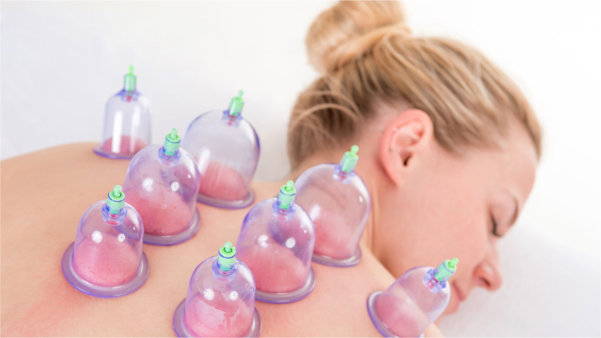 Most people learned about cupping therapy when it was all over the news during the 2016 Summer Olympics in Rio.  Michael Phelps and other athletes were seen with those round hickey-like marks on his back and arms (these are left behind after the process, typically for 2 to 7 days).  Since Rio, many movie stars have also been spotted with the tell-tail signs of a recent cupping session.

And, you have others who see these marks for the first time and exclaim, “What the heck caused that?”, or when they hear about cupping therapy they will say, “What in the world is cupping therapy and what does it do?”

If you are one of those who have been left in the dark when it comes to cupping therapy, here’s an explanation of cupping, beginning with…

Cupping works by creating a vacuum within a glass jar or plastic cup – heat was originally used to create the vacuum within glass cups (often called Fire Cupping). Modern hand-pump cupping systems are safer because they eliminate the need to light something on fire in order to create a vacuum!  The modern cupping therapy systems are made of plastic.  The suction that the cupping process creates is instrumental in interrupting the way the brain registers pain. In addition, it balances the way energy flows within your body creating a space, literally, for healing to occur.

There are two application methods used to set the cups:

When the cup is applied to the skin, the created vacuum pulls the client’s skin and muscle tissue into the cup about ½ to ¾ of an inch. The amount of suction created by the practitioner depends on the condition being treated.  The cups may be moved (after oil has been applied to the skin), or they may be left undisturbed over any given area.  For example, cupping can be placed and left over the lungs (for up to 10 minutes) in order to help ease breathing and to facilitate decongestion.

This form of therapy can also be used in conjunction with acupuncture and is often called Needle Cupping.  Please note that this should only be conducted by a certified acupuncturist.

There are different forms of cupping, but the common ones include:

This is when cupping is done on a specific region of the body (typically the cups may be left in place for three to ten minutes).  This is a strong treatment that creates a strong suction, so it isn’t recommended for those that have a week constitution as it drains stagnation from the body.  During your first visit the duration of your cupping therapy will more than likely last for 3 minutes.

This form of cupping is known for its speed.  The therapist will place many cups all at once – the cups will be left on the body for a short amount of time (normally under one minute) before they are removed, then reapplied.  This technique will take place for a couple of minutes and is great for stimulating the client’s Qi as well as blood circulation.

How Does it Feel?

When the cups are placed on your skin, you may feel a strong suction – most people find this relaxing. When you’re having the procedure done, it’s recommended that you close your eyes and imagine the pathogens being drawn-out of your body.

Cupping is used to treat many health issues, such as:

Now that you know what cupping therapy is all about, you may want to go ahead and give it a try.  There are many benefits nesting behind this tried-and-true ancient healing treatment known as Cupping Therapy.

Important This site makes use of cookies which may contain tracking information about visitors. By continuing to browse this site you agree to our use of cookies.